Shiba Inu Runs Off After Owner Gets Hit By Motorcycle In Bukit Panjang, Search Ongoing

No matter how careful paw parents may be with their fur babies, unexpected situations can throw anyone off guard. This was sadly what happened when a lady brought her Shiba Inu out in Bukit Panjang on Thursday (13 Oct).

A collision with a motorcycle startled the poor canine who immediately ran away.

A search for the missing dog is currently underway.

Shiba Inu runs away after accident in Bukit Panjang

Sharing about the incident in the Lost and found pets in Singapore Facebook group, user Ms Wisley wrote that her friend was hit by a motorcycle at Bangkit Road in Bukit Panjang on Thursday (13 Oct) morning.

Likely frightened by what happened, her Shiba Inu ran away.

Thankfully, the cars driving by managed to slow down and avoid colliding with the animal.

Later throughout the day, netizens took to the comments section of Ms Wisley’s post to share their sightings of the dog named Ritchie:

The Facebook user who spotted Ritchie at the second location claimed they tried to secure him, but he kept running till the basketball court near Block 213.

An update from Ms Wisley at about 3pm that day mentioned that someone had spotted the Shiba Inu running into Cashew Heights condominium.

However, when she went there, she couldn’t find him. The most recent update from a missing poster stated that Ritchie was last seen yesterday (14 Oct) morning near Bukit Panjang CC. 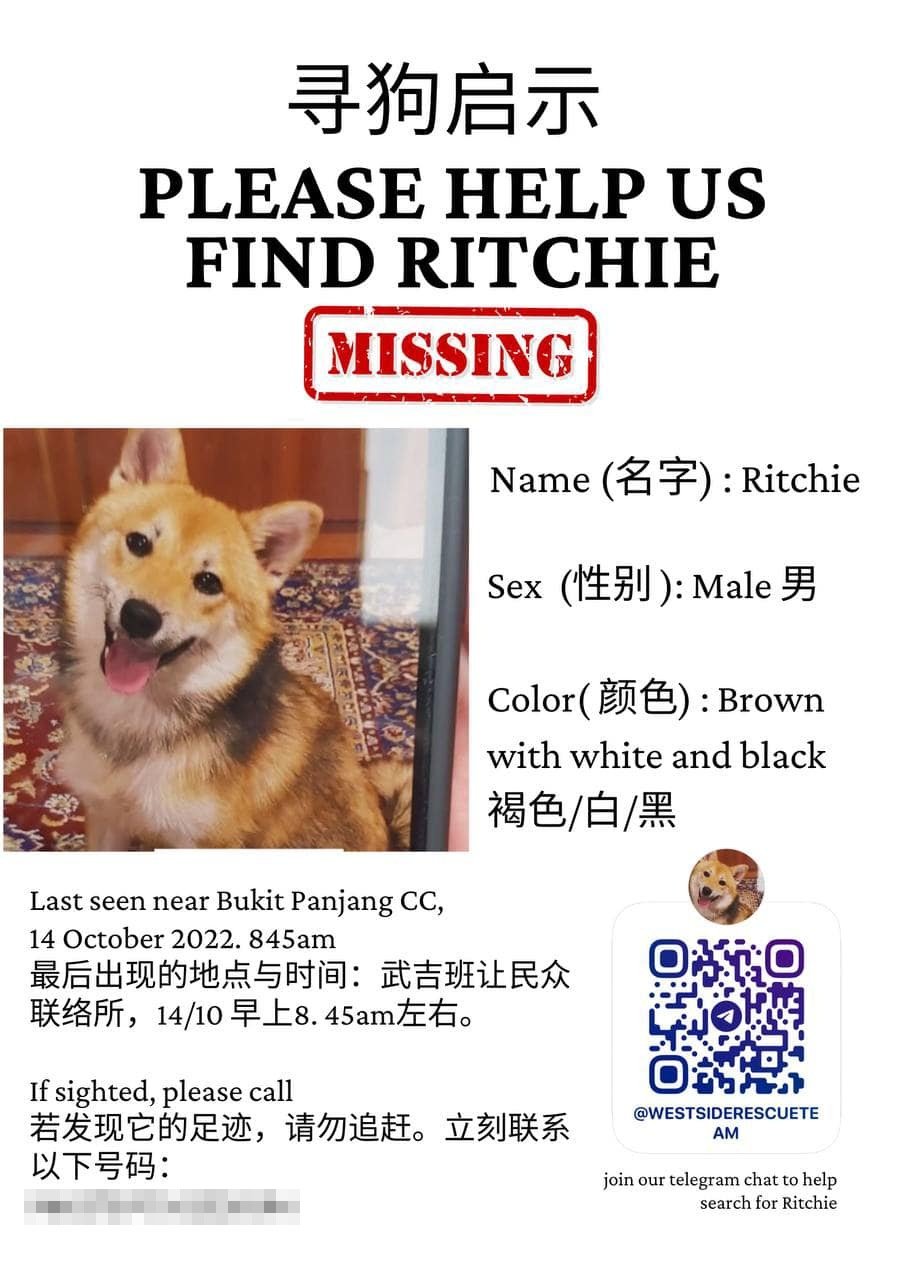 Anyone with useful information should contact the numbers in the poster or join the telegram chat to help bring Ritchie home safely.

In replies to various comments on her post, Ms Wisley shared that Ritchie’s owner has already filed a lost dog report with the Animal & Veterinary Society (AVS) and the Society for the Prevention of Cruelty to Animals (SPCA).

They have also circulated posters in hopes of raising awareness.

Since Ritchie’s owner is currently nursing a broken collarbone after leaving the hospital, she is unable to look for him herself. Thankfully, Ms Wisley is doing everything within her means to help.

We sincerely hope that Ritchie is safe and well out there and that he’ll reunite with his family soon.

Have news you must share? Get in touch with us via email at news@mustsharenews.com.