New products are already reimaging the typical video-conferencing interface where each participant occupies their own square in a grid. Room, a new product created by Cevat Yerli, the former CEO of video game developer Crytek, is one of them.

“Due to the recent and rapid virtualization of corporate interactions, we have pushed ourselves into these two-dimensional, flat spaces,” Yerli in a statement(Opens in a new window).

“Room has been designed to encourage people to interact in inspiring 3D virtual meetings, and ultimately support and enhance unique cultural norms. Not as a replacement for the real thing – but as the second-best option.”

There are currently two subscription types for Room: the Basic Plan and Founder Plan—and the company plans to add two more advanced Pro and Enterprise Plans.

The basic plan is free, and it offers three rooms in which you can have meetings for up to 60 minutes with four people (three plus a host). The Founder Plan costs $6/month, allows you to choose between 17 rooms where 17 people can gather for as long as 24 hours. You could even have a virtual sleepover.

The beta(Opens in a new window) experience of the Basic Plan is available now. Users can invite friends and coworkers to meet around a conference room, a fireplace, or a broadcast studio.

We tried the beta here at PCMag. We chose the conference room, and had a blast clicking on different chairs to “sit in them.” We used the arrow keys on our laptops to scan the “room.” Visually, it didn’t blow us away, but we had fun, and it was a new way to interact as coworkers. That’s exactly what the product intends.

Recommended by Our Editors

We tested out the virtual whiteboard function, as well as the chat function, which functioned on the first try as expected. To our surprise (and delight), we were even able to make the beads knock from side to side on the Newton’s cradle(Opens in a new window) decoration on the table by clicking on it. 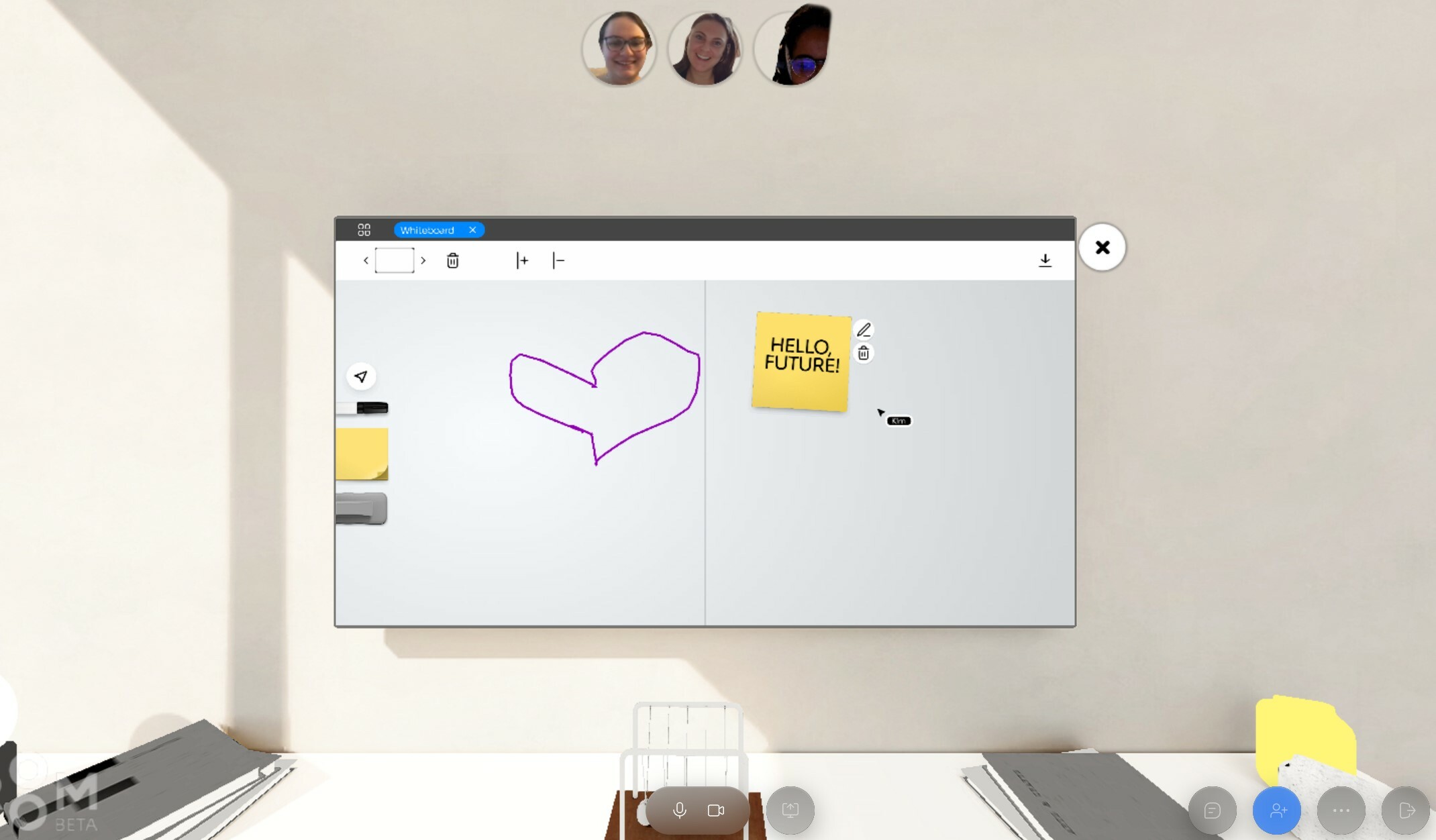 We drew a heart and stuck a virtual Post-It note on the virtual whiteboard.
(Credit: PCMag)

“We believe that digital spaces should be shaped by real life and feature the presence of people, not anonymous avatars,” said Yerli.

It’s a sentiment also echoed by Mark Zuckerberg, who has invested over $10 billion to build out the metaverse under his company Meta (formerly Facebook). In August, he posted a selfie of his avatar in a game-like metaverse environment (read: the Sims or Second Life on steroids), which was mocked for being simplistic and low-quality.

But in a recent appearance on the Joe Rogan podcast, Zuckerberg outlined his vision for making the metaverse as realistic as possible. This includes allowing people to “show up” at work by appearing as a hologram, which seems to be the route Room is also going for rather than animated avatars.

Get Our Best Stories!

Sign up for What’s New Now to get our top stories delivered to your inbox every morning.

This newsletter may contain advertising, deals, or affiliate links. Subscribing to a newsletter indicates your consent to our Terms of Use and Privacy Policy. You may unsubscribe from the newsletters at any time.

Crypto Trader Names One Altcoin That Could Outperform the Market, Updates Outlook on Bitcoin and Sushi