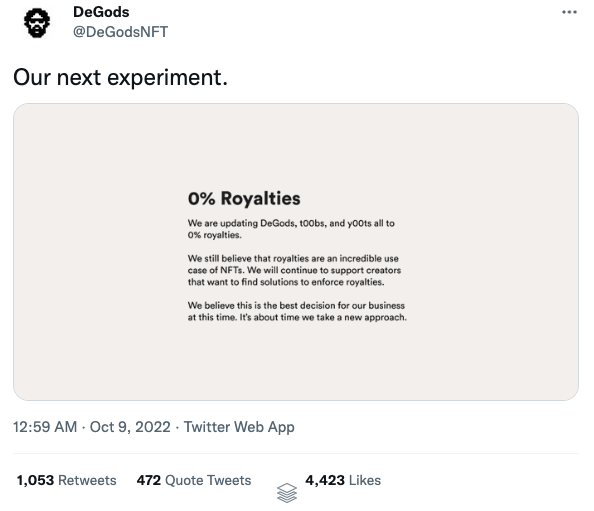 There has been a lot of $dust kicked up (pun intended) recently about NFT projects that are taking royalties on secondary sales, or rather not taking royalties. Frank from DeGods recently posted that the DeGods project will be removing royalties on secondary sales. Today there was a great conversation led by Alex @ShiLLin_ViLLian on twitter spaces today where Frank participated and shed some light on this topic and some other points that resonated with many founders weather the storm in this bear market. 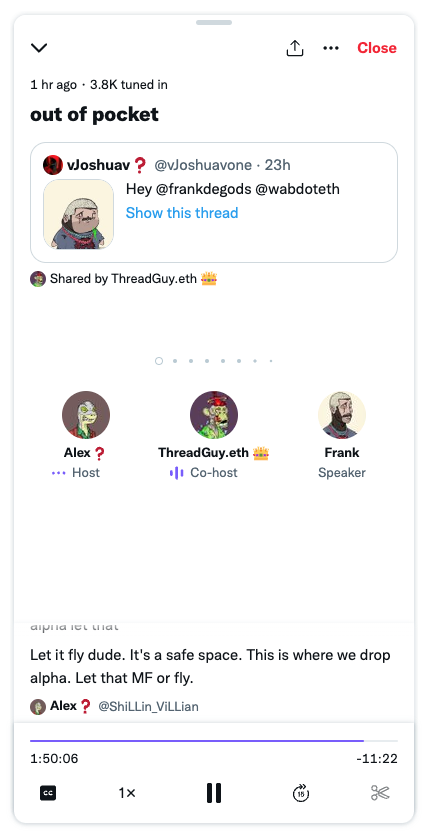 The Spaces Recording can be found here.

1:15 – Projects that weather the storm deserve a second chance. ❤️

1:20 – Founders who try hard to make everyone that participated in the first project part of the second project and show research and learning was had, will win 🔥

1:22 – DeGods are in the process of reinventing themselves, this zero percent royalty is part of that 💯

1:25 – Will zero percent marketplaces will get traction.❓

1:30 – The Creator Economy will influence how NFT projects make money. We think the market will go to zero percent royalties so we are trying to get ahead of it.🛠

1:35 – NFT trading has been on the downtrend for 6 months. Many projects are already out of money. Many of the founders that have one under their belt will innovate on round two which is another reason we think zero royalties will become a trend that pushes that innovation.

1:37 – Thugbirds have collected 23m in royalties and zero back to the project.

1:39 – Frank says he’s “pro creator royalties”. If by us (degods) going to zero percent will push technology so royalties become real, he would be happy. 🔥🔥

1:41 – You don’t fool me, you got your money, send zero percent and kill all the other project… 🤌

1:43 – If the founders can’t figure out how to make money outside of royalties then fuck’em!

Royalties have been a hotly contested subject with collectors on one side and founders on the other. Without royalties, many of these projects and some of the marketplaces wouldn’t be around today without royalties so it’s certainly an interesting conversation that seems to be just getting started.

If you want some NFT entertainment peppered with some info in the space, check out the hosts and space recording.