2022 to be the biggest year for hacking as DeFi protocols lose $718 million in 15 days: Chainalysis

The crypto space, just like the broader markets, has seen its barrage of security flaws and loopholes, which some people continue to exploit even after 14 years since its inception. In fact, over the last couple of months, the intensity has increased to the point where the year 2022 might receive the crown for the most losses.

More hacks are on the way

According to an analysis by Chainalysis, the month of October has become the biggest month ever in terms of hacking. In just the last two weeks, over $718 million have been stolen from 11 different hacks, as many as 4 of them taking place on the same day on October 13.

With two more weeks yet to go, October might singlehandedly set new records for most losses in a year. Last year, the crypto market faced about $3.2 billion worth of hacks over the period of 12 months. 2022 has already crossed $3 billion in losses in just ten months and, at this rate, will most certainly cross 2021’s losses before the year ends. 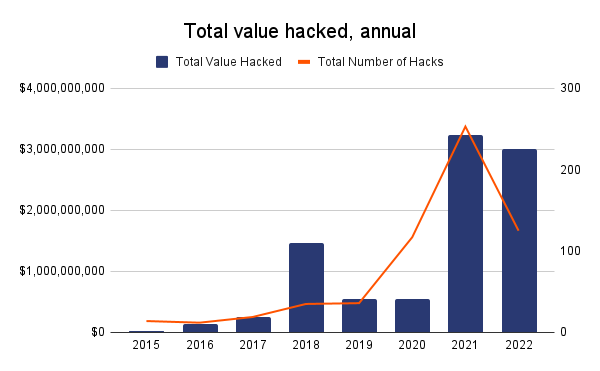 Interestingly, the focus of the hackers has shifted more to DeFi recently since that is the most booming market, with its own set of flaws. DeFi protocols are still in their infancy and will take time to achieve perfection, where security breaches become a thing of the past.

Within DeFi, too, a particular area is being targeted. As explained by Chainalysis,

The most recent hack on the Mango Markets Solana DeFi exchange stands as a testament to these figures.

Earlier this Tuesday, the Mango Markets experienced an exploit where the hacker managed to steal more than $100 million.

Now on Friday, Mango DAO has come up with a proposal where the hacker has been asked to return $67 million worth of tokens and keep $47 million in exchange. Mango DAO also assured that no charges would be pressed against the hacker if they cooperate and accept this offer.

Whether or not the hacker will give up $67 million is yet to be known.