Editor’s Note: With so much market volatility, stay on top of daily news! Get caught up in minutes with our speedy summary of today’s must-read news and expert opinions. Sign up here!

(Kitco News) – The Bank of Canada has released a report that looked at Bitcoin ownership and use in Canada from 2016 to 2021, which provided five insights into the behavior of Canadian citizens in relation to the top cryptocurrency.

The share of Canadians who own Bitcoin rose from 5% in the period from 2018-2020 to 13% in 2021, coinciding with the widespread increase in the wealth and savings of Canadians that was witnessed during the COVID-19 pandemic.

The release of multiple cryptocurrency investment products by fintech companies helped on the adoption front as it “provided customers with a wider range of accessible and user-friendly platforms to buy Bitcoin.” The preferred method of purchasing Bitcoin was via mobile applications. 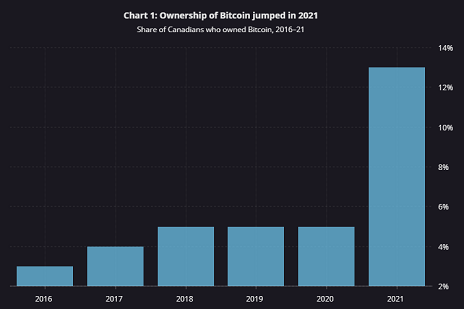 Share of Canadians who owned Bitcoin, 2016-21. Source: Bank of Canada

Mobile applications have risen in prominence over the past few years as cryptos rose in popularity, which was reflected in the fact that half of the individuals that identified as holding Bitcoin said they made their first purchase in 2020 or 2021. More recent adopters were also more likely than older hodlers to view Bitcoin as an investment vehicle.

Awareness of Bitcoin in Canada remains quite high, with 90% of those surveyed in 2021 indicating that they have heard of Bitcoin and have at least a passing familiarity with it. The level of knowledge varied greatly among the survey participants, with 40% of respondents that claimed to own Bitcoin having a low level of knowledge.

Roughly two-thirds of those surveyed who did not own Bitcoin demonstrated a low level of understanding of how the currency functioned.

While the number of Canadians who hold Bitcoin is on the rise, the study showed that their holdings are relatively small, with the median amount of BTC held in 2021 standing at Can$500 and 70% of Canadian hodlers owning the equivalent of Can$5,000 or less. 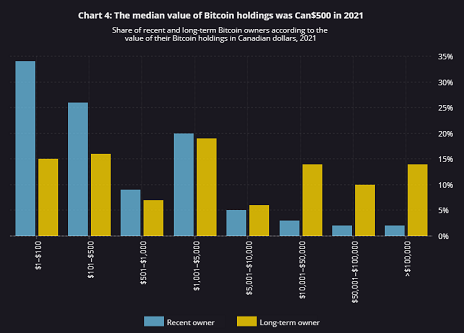 Share of Bitcoin owners according to the value of BTC holdings. Source: Bank of Canada

Long-term owners tended to have larger holdings as they reaped the benefit of the significant run-up in price that occurred in 2020.

Half of the respondents indicated that they have heard of at least one altcoin, with Ether, Dogecoin, and Bitcoin Cash being the most cited, but the claimed holdings were small. “For example, only 7% of Canadians own Ether, and about 4% own either Dogecoin or Bitcoin Cash,” the report said.

The bull market and subsequent crash of 2021 resulted in 25% of cryptoasset owners reporting that their holdings had at some point lost significant value in a price crash, as compared to 18% who reported a similar experience in 2019.

Additionally, 11% of crypto holders also reported losing access to their wallets, 9% said they encountered a problem when conducting a crypto transaction, and 7% reported stolen funds.


Demographically, “Bitcoin owners are more likely to be men, relatively young, with a university degree or a relatively high income.”

In conclusion, the report noted that “the changes seen in the crypto market and Canadians’ engagement with it have taken place in the broader context of a sharp increase in household wealth in 2020 and 2021, and a corresponding increase in a range of traditional investments such as mutual funds, real estate and foreign securities, along with increased exposure to cryptoassets.”

Digital assets, in particular, have “been supported by [the] commercial promotion of crypto as an asset class and an improvement in retail investor access to this market.”